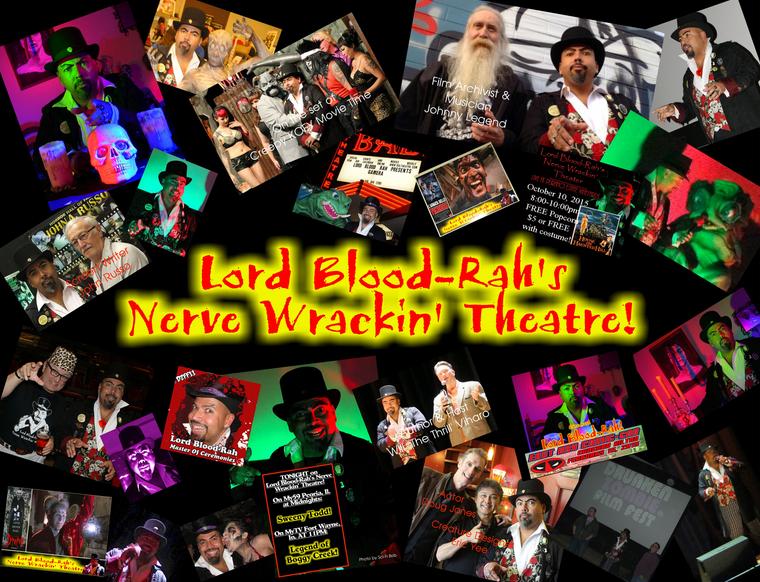 Lord Blood-Rah is the geeky creation of Frank Wallace-Ailsworth, himself a life long horror and sci-fi geek.

Growing up in the San Francisco Bay Area in the late 60's/early 70s, Frank was introduced to genre films, both classic and not so classic, through the legendary TV horror host show Creature Features hosted by Bob Wilkins.

The combination of monster classics like Frankenstein and The Wolf Man, as well as lesser cult films like The Beast of Yucca Flats and Attack of the Mushroom People, with Wilkins' dry witty commentary became the inspiration that would drive the creation of Lord Blood-Rah in 2009.

In that year a close friend, Damian Chouinard, wine maker at the Chouinard Winery in Castro Valley, Ca., decided he would like to start showing horror and science fiction films at the winery.   It was suggested he should have a host for these events and, when no other host was forth coming, Frank got the job.

Relying on his study of voice acting and improvisation, Frank created the character of Lord Blood-Rah; the self proclaimed High Lord of Geekdom, a proud Geek who lives to spread the love of off-beat and imaginative genre films to all those ready to "Geek Out".

Since then, Lord Blood-Rah has hosted Lord Blood-Rah's Nerve Wrackin' Theatre LIVE at the Chouinard Winery every Friday Night each September, as well as many other live genre film events throughout the years including: The 80th Anniversary of Frankenstein and Dracula at the BAL Theatre, San Leandro, Zombie Day at the Rheem Theatre, Moraga (with special guest John Russo, screen writer of Night of the Living Dead), a run of genre shows at The New Parkway in Oakland and countless more each year.

In 2013, Lord Blood-Rah's Nerve Wrackin' Theatre made the leap to television and the web.  Now Geeks, Geekerellas, Geekulas and Geekeritas all over the country, and the world online, join Lord Blood-Rah in Blood-Rah Manor each week as he presents the best, worst and wildest horror and sci-fi films ever made!